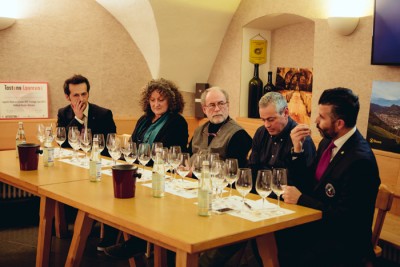 “A wine is exceptional when you sit in a chair, tame, close your eyes and see the immense” Giacomo Tachis. Tasting dedicated to the unforgettable winemaker.

Mannucci Droandi originates from the agricultural and wine traditions of two families, the Mannucci, small landowners in Valdarno from the early 19th century and the Droandi, from the XVIII farmers in Carmignano and then to San Giustino Valdarno. Currently it is managed by Società Agricola Nuova Agricoltura Srl, with sole director Maria Grazia Mammuccini, in turn coming from an old family of farmers. Conducted since 2000 with the Certified Organic Farming method, this choice, together with the valorisation of native grape varieties, is the fundamental basis of our work. The objective is to contribute to the protection of the environment, to mitigate climate change and at the same time to offer products capable of representing the identity of our territory, combining local tradition with innovation in order to continue in the best way As the previous generations have been able to build. Responsible for the vineyards and the cellar is Roberto Giulio Droandi.
It currently consists of two main bodies. The first, the farm Campolucci (from the Latin “field of the sacred wood”), consists of a large farmhouse (already present in Catasti Granducali, is still the center of business and houses the cellar), vineyards and specialized olive groves. Campolucci is located on the eastern slopes of the Chianti Mountains (Chianti region, Colli Aretini subarea) at an altitude of 250m above sea level, on top of a hill overlooking the south overlooking the ancient fortified village of Caposelvi, near Mercatale Valdarno (Municipality of Montevarchi, Province of Arezzo).
The second body is the farm Ceppeto, consisting of vineyards and olive groves planted around a large square stone farmhouse (built in the 18th century on the ruins of an ancient ruins). It is also located on the east side of the Chianti Mountains (Chianti Classico) and more precisely on the south slope (400m above sea level) of the hill dominated by the castle of Starda (Municipality of Gaiole in Chianti, Province of Siena).
The grapes are vinified in the farm and the wine produced is sold directly to the cellar, or in the peasant markets and distributed in Italy and abroad. In the vineyards dominates the Sangiovese, both in old and new plants, and in the cellar, respect for tradition is coupled with the necessary attentions that are now being acquired for the purpose of obtaining the best quality.In memory of the early years of the new adventure, Mannucci Droandi had the good fortune and honor to meet on their way one of the great fathers of Modern Technology, Giacomo Tachis, who gave him great tips on how to continue the road. From his hands, the first two vintages of the two labels that were produced in those years that in a few specimens came to us. In an unforgettable event we could taste four labels made directly by Tachis and the last two on the market packed by Gianfrancesco Paoletti following the stylistic evolution of Tachis.

The picture that emerges from this tasting is unmatched on all points of view. In fact, the Tachis followed the Mannucci Droandi in the early years of their adventure without wanting any compensation in return. A master oenologist, a father of many oenological jewels, who devoted himself to so many smaller companies only in order to help them. He later left the oenological guide to Paoletti giving new lymph to the range of labels produced by the small organic company. Tasting wines were the following: 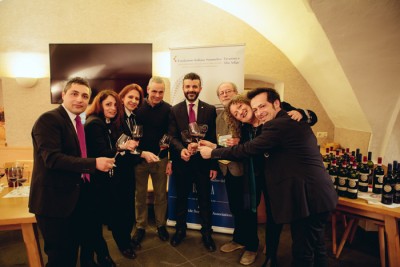 “A wine is exceptional when you sit in your armchair, tame, close your eyes and see the immense” G. Tachis.
Have you ever found yourself in front of a wine you know for sure not to reappear anymore? This is one of these rare cases. Then try to carp all the facets to keep them in a drawer in memory and guard it forever with the awareness of being a privileged and a lucky man. Campolucci Sangiovese 1999 Igt, second year and … last of Master Tachis with 13.0% vol. Sangiovese 70% and Cabernet 30%. A bit even in the wake of the moment (I think of the Tignanello). Here the Tachis personally selected the clusters and areas to use. One year in wood (only 30% new) and one bottle year. A wine able to evoke a particular and very vocal territory.
This phrase encloses the essence of the thought that honors me to taste this wine.
Very often dreams become reality, just want it, this will keep it forever among the most dear ones. With reverence we are in front of a delicate and delicate wine. Its feelings are elegant and well expressed. This wine knows tradition and Tuscany, sweet tertiary, cinnamon rhubarb orange, thin china, pepper, delicate feeling of carnation, carob. Dry purple, leather, coffee bean, undergrowth, cherry Vignola and blueberry jam. The skin comes after satisfying oxygenation, the replenishment after 24 hours of last night’s opening. In the mouth is structured, round, soft and enveloping wet ground. In the mouth is structured, round, soft and enveloping. Maturity has given him complexity and completeness. At the height of its life, it has a considerable length and a retreat of inviting rhubarb. Certainly I would eat a Fiorentina cooked in the right way. We are honored to have been able to experience an unforgettable tasting.
MANNUCCI DROANDI
Via Rossinello and Campolucci, 79 – Loc. Caposelvi
52025 Montevarchi AR
Tel. 055 9707276
Fax 055 9707276
info@mannuccidroandi.com
www.mannuccidroandi.it
Posted on 05/04/2017
Link to article:
https://www.bibenda.it/news_bibenda_singola.php?id=4377