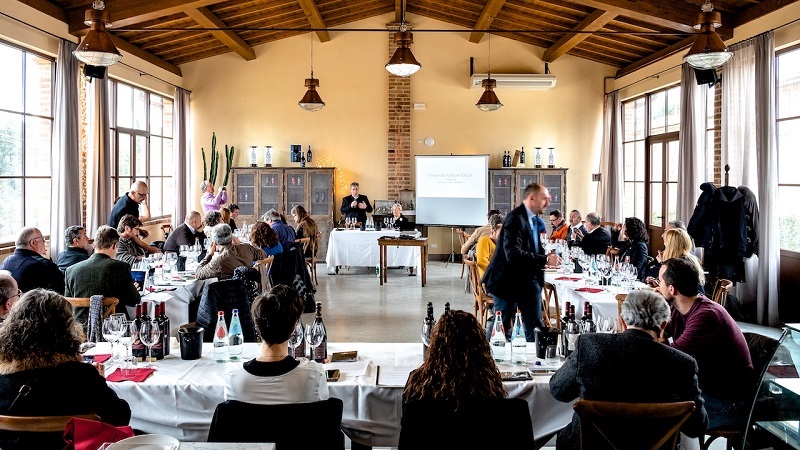 Posted at 11:01h in Press by Mannucci Droandi
0 Likes
Share
On the Tuscan coast in Castagneto Carducci, notoriously the land of international vines, the Azienda Agricola Podere il Castellaccio of Alessandro Scappini, on the other hand, also aims at indigenous people.

Their Valénte Tuscan IGT 2016 , a blend of 50% Sangiovese, 25% Pugnitello and 25% round leaf comes from a hectare and a half of galestro schist, very thin and rich in magnesium and potassium skeleton. Fermentation in cement vats takes place separately for each grape variety and the aging takes place in 5 hl tonneaux for one year. About eight thousand bottles produced. Intense bright ruby. The intense nose, elegant and mature, unfolds on hints of liquorice root, ripe cherry, white pepper, after height, mentholated tones on floral shades of violet. Consistently intense and pulpy taste, astringent but sweet and thick tannins, long finish with notes deriving from the aging in wood still in evidence. Young and suitable for aging. Difficult to establish the contribution of the round leaf to this excellent blend, it remains a worthy wine thanks also to the terrroir of origin and to the type of soil most suitable for both Sangiovese and Round Leaf. There is curiosity about the pure round leaf that will arrive in the near future.

Going north along the coast to Pisa and precisely to Lari, where the air of the Pisan hills meets the sea, Podere Anima Mundi, in the person of Marta Sierota, soul of the vines, plant more than ten years ago 0.6 hectares of round leaf in biodynamic regime on sandy limestone soil of marine origin, two hundred meters above sea level facing south-east. Harvest in September, vinification in cement with indigenous yeasts, aging in sixth passage barriques for a year. First vintage 2014. Taste the Mor Morocco Igt Toscana 2015 round leaf in purity. Intense ruby ​​red, the nose is very open on hints of cherry under spirits played on the thin line of pushed maturation, interesting tertiary animal leather notes in the first place that give complexity to the nose. If the nose reveals itself slowly, the mouth has an immediate impact for pulp and intensity, great freshness, the tannic outfit is definitely the protagonist but it is managed very well and the wine closes on slightly astringent notes, without doubt a wine of great authenticity.

Crossing south-east Tuscany we arrive in Valdichiana, in Foiano della Chiana, where the Santa Vittoria company cultivates 35 hectares of vineyards in which there are international vines but also autochthonous vines such as pugnitello, sangiovese and round leaf for reds. The company has participated in an experiment dedicated to indigenous vines for a good eight years, from which emerged the particular aptitude of some including the round leaf. Poggio al Tempio Igt Toscana 2015 is a blend of 70% Sangiovese, 20% Pugnitello and 20% round leaf. Vinification in traditional cement, aging in steel for Sangiovese and round leaves, only the pugnitello is aged in barriques. He spent a year in the cellar before bottling. Intense and dark garnet thanks to the round leaf, initially somewhat introverted nose. The fruitiness is played on red fruit and is accompanied by a dark spice of clove, the round leaf emerges in the spicy and slightly vegetable notes of cut grass. Intense, fresh and fairly warm in the mouth where the tannins dominate the finish. Traditional wine for the whole meal.

Near the Tuscan capital in Grassina is Podere Ema which in the tradition of “Puro Toscano” raises only native vines, after experiments conducted in collaboration with the University of Florence from 2006. The first vintage is 2013. Il Foglia Tonda Igt Rosso Toscana 2016 comes from two hectares of eight-year-old vineyards at 250 meters above sea level with east-east exposure and medium-textured clay-limestone soil. It is fermented and aged in Impruneta terracotta jars. An excellent example to understand the characteristics of the vine. Pretty intense ruby ​​tending to garnet. The nose is of a certain complexity in my opinion linked to the type of soil of origin, notes of prune and plum jam, pleasantly enveloping spiciness and some slightly green nuances reminiscent of chestnut honey. Mouth of medium body, good acidity and freshness that predominate on the extraction, the tannins at this point I would say typical of the grape, are slightly astringent on the finish.

Mannucci Droandi, an organic farm,   it is located in Montevarchi and was among the first to conduct experimentation on the round leaf in the mid-nineties with the then Experimental Institute for Viticulture of Arezzo today Crea-Vic. The vineyard is 4000 m2 at 250 meters above sea level. Medium-textured alluvial soil. In the vineyard the round leaf is managed with a minimum tillage of the soil, breeding with short spurred cordon, canopy management in the summer, bunch thinning, leaf removal and harvesting in various passages. It is fermented in vats of small capacity, ten hectoliters, with prolonged maceration for about twenty days. Maturation fourteen months in second and third passage French oak barrels. Round Tuscan Leaf Red Igt 2015. Ruby tending to garnet. Intense warm nose very focused on notes of cherries in alcohol and black cherry, nuances of vanilla, spiciness of Mediterranean scrub, laurel. The mouth is very elegant and consistent with a smooth finish although the tannins are slightly astringent. Valid example of how the pure leaf can have its own dignity and complexity. Interesting to follow the development in the bottle.

Focusing on the recovery of our autochthonous wines is certainly a winning choice for our viticulture, making us able to distinguish ourselves in a unique and inimitable way on the stage of the global wine market, but it is also a way to characterize smaller denominations in our territory, for example in the Orcia doc, and to create particular wines in the more famous ones, see Bolgheri. The round leaf proved by these tastings, a vine very sensitive to the type of soil. It shows a wider range of olfactory nuances in galestro soils together with greater elegance, and a greater fruit and body in terms of total polyphenols, in soils of medium clayey consistency. It requires a lot of work in the vineyard to ripen the grapes. From fairly warm wines but balanced in acidity. Tannins are predominant and difficult to soften, they tend to be astringent, at least in youth. In blend the round leaf gives the body Sangiovese, color and floral nuances of violet and elderflower, spicy especially of Mediterranean scrub. In solitary the round leaf is declined in very different expressions for which the experimentation of the companies turns out decisive factor in the choice of the purity in bottle.

I thank, also on behalf of all the directors of ONAV SIENA, Mrs. Donatella Cinelli Colombini for giving us the opportunity to deepen the history of the rediscovery and recovery of a vine that will continue to amaze us in the near future.