The Tuscan Previews crown the Sangiovese, but …

Home > Press  > The Tuscan Previews crown the Sangiovese, but … 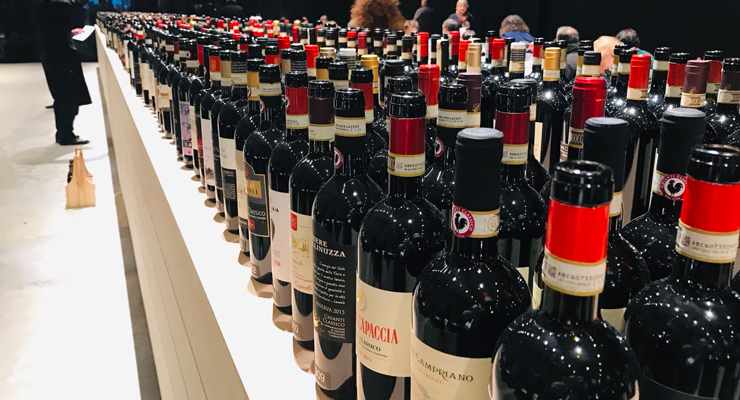 11 Feb The Tuscan Previews crown the Sangiovese, but …

Posted at 11:25h in Press by Mannucci Droandi
0 Likes
Share

That is the Consorzio Bianco di Pitigliano and Sovana; Wines lands of Pisa, Carmignano, Montecucco, Val di Cornia, Maremma Toscana, Colline Lucchesi, Montecarlo, Orcia and Valdarno di Sopra.
I tasted 94 wines, focusing mainly on vintage wines and discarding the reserves. What to say? Meanwhile, some white 2018 and some red 2017 have appeared. Most were 2015 and 2016, but also 2013. No samples received in 2014, which apparently seems to be a year to forget.

Then I flip through the notes, which eventually crown a doc, which I personally love a lot and is Montecucco, in Maremma. Then the confirmation of the good work that the wineries that over the years have rewarded among the Top Hundreds continue to do. Sassotondo immediately stands out with an intense yellow of its superior Pitigliano Bianco “Isolina” 2017. A virile, mineral, pleasant and intense wine. But I did not mind at all the 2018 of the Roccaccia Estate with a superior Bianco di Pitigliano “Oroluna” which had a filigree texture. Sassotondo then returns with the Sovana “Ombra blu” 2016 red predominantly of sangiovese and merlot.
High marks to the Sovana “Cor Unum Rosso” of Villa Corano 2016, caressing with its notes of jams and hints of milk and mint. Pleasant its breadth and its tannic texture.

Enveloping the Neronotte of Tenuta Roccaccia , a company that works very well. In the Pisan lands I report the Fibbiano Farm . His Terre di Pisa Sangiovese “Ceppatella” 2013 was silky, very pleasant in its balance. Then you have to go to the Tenuta di Ghizzano to find a sample that combines heat with the green note, certainly thanks to the petit verdot that joins merlot and cabernet for the Red Tuscan Coast “Nambrot” 2016.

Applause for the Tuscan Red “N’Antia” 2015 of Badia di Morrona , two cabernet and merlot cut. Lots of stuff, but above all infinite elegance.

In the Carmignano doc the surprise was the champion of Podere Allocco with Carmignano 2016 (sangiovese, cabernet and syrah). It had an unblushing fruity note, a beautiful structure. Bello also the Carmignano di Castelvecchio 2016 that also plays with the canaiolo. Deep, vertical with notes of mint and aromatic herbs is then the Carmignano 2016 of Tenuta Capezzana , which is confirmed leader of this doc. And then our old love, which we already reviewed in the early nineties on the 100 best wines of Italy: the Piaggia with its Poggio de ‘Colli, pure cabernet, of great impact and structure. But the same can be said of the Ghiaie della Furba 2015 and the Ugo Contini Bonacossi of Tenuta Capezzana (pure Sangiovese), at the absolute top.

Now we come to the Montecucco doc with the pure Sangiovese from Poggio L’Apparita , already our Top Hundred , with a crunchy, placid and very elegant red that has been able to well interpret the soul of Sangiovese. The surprise, however, was a new cellar for us, namely Casale Pozzuolo with the Montecucco Sangiovese Rosso della Porticcia 2015. Notable, so much to deserve our rare 5 asterisks (*), which go to the perfect wine. And surely we will reassemble it.

And what about the Otto Ettari company with its Sangiovese 2015 which had a truly exemplary elegance, but above all a fine texture with the silk of its tannins. Confirm also for Poggio Stenti , one of our love, with this Tribulo 2015 textbook. And finally a confirmation that made us happy, because we had seen it right: The Montecucco Sangiovese “La Querce” by Poggio Mandorlo vintage 2012. Fantastic interpretation of the elegance of Sangiovese. Rara avis, a 2014 reserve that, out of curiosity, we tasted: Poggio Lombrone di Collemassari , which had a fresh freshness and much to say in the coming years: “Bravo!”
Certainly the Montecucco Sangiovese reserve 2013 of Basile “Ad Agio” is another story, and I still remember that effluvium of Mediterranean scrub as a wine of great impact.

We pass in Val di Cornia. And here the 2016 Sangiovese “Rodantonio” by Giomi Zannoni won us over. Feel immediately notes of intense jam, of pugna, to then express themselves in a warm and valuable balance, so as to touch the 5 asterisks of perfection.

This is the summit, although I liked the reds of Poggio Rosso (Fufluna) and those of Terradonnà , pure Sangiovese.

On the Colline Lucchesi doc I find it hard to express myself: modest results, with the exception of the Tenuta di Valgiano which presented the Palistorti 2016 (sangiovese, syrah and merlot) with a very fruity impact.

The Orcia doc deserves a proper chapeu : and here the list of thickens with the sublimation of the Capitoline 2015 Orcia Riserva “Capitoni” but also the Red Lion and the Cinderella by Donatella Cinelli Colombini who strongly believes in this doc and it shows . Good is the Red Orcia of Il Poggio both in the 2015 and 2016 samples.
Among the Orcia Sangiovese wines again Marco Capitoni with the Troccolone 2017, but also Sassodisole and Campotondo . And finally, we liked the Castelnuovo Tancredi Orcia Rosso fruit of Sangiovese and Merlot.

Of Valdarno di Sopra, doc on which we would like to return soon, we point out the vertexes of the champions of Mannucci Droandi , La Salceta , Petrolo , with its organic red and finally Tenuta Sette Ponti .

While in the Tuscan Maremma we immediately say that the surprise that I did not expect was the Alicante, above all the Cantine Bruni champion , the Oltreconfine grenache 2017 that evoked rare exotic fruits, warm spicy notes and a lot of fragrance.

I did not know the company Le Sode di Sant’Angelo but its Maremma Toscana Sangiovese “Sassi Dautore” 2017 was a shock for balance and great intensity. And so Ribusieri with Sololaura 2016, very good. Among the grapes I was struck by the Maremma Rosso de la Chimera d’Albegna which had floral notes of irises and officinal herbs (sangiovese, cabernet and merlot).
Get the maximum score, instead the Maremma Toscana Rosso of the Rocca di Frassinello , our heart cellar. Do you know a smell of pure incense, like entering a church? Then a velvety declination, but also incisive in intensity and persistence.

Also exceptional is the Maremma Toscana Rosso di Basile , the Bio 2015 Commander, who mixed animal and fruit flavors and an overall pleasantness in its truly remarkable round expression. The Rosso from Tenuta Rocca di Montemassi is also very good, which touched on freshness with the spiciness of coffee notes.

Our tasting ends here. We will update ourselves with the next ones.

Ps In Chianti Lovers my tastes were 134. But here I felt less enthusiasm than the previous day. Too many different and modest Chiantis. In any case, I liked the Chianti docg 2018 from the Tamburini farm . Noteworthy is the 2018 Chianti of Camperchi , the best of all 2018.
High marks for the Chianti of the Cantine Leonardo da Vinci and for that of Casa di Monte . Elegant the 2018 Chianti of Il Corniale , of Il Palazzo and of Il Sosso . Then Le Fonti in San Giorgio and the Fonti farm .
Among the Chianti of the Colli Senesi 2018 the Fattoria Il Poderaccio stands out.

Now let’s go to the Leopolda to taste the Chianti Classico.